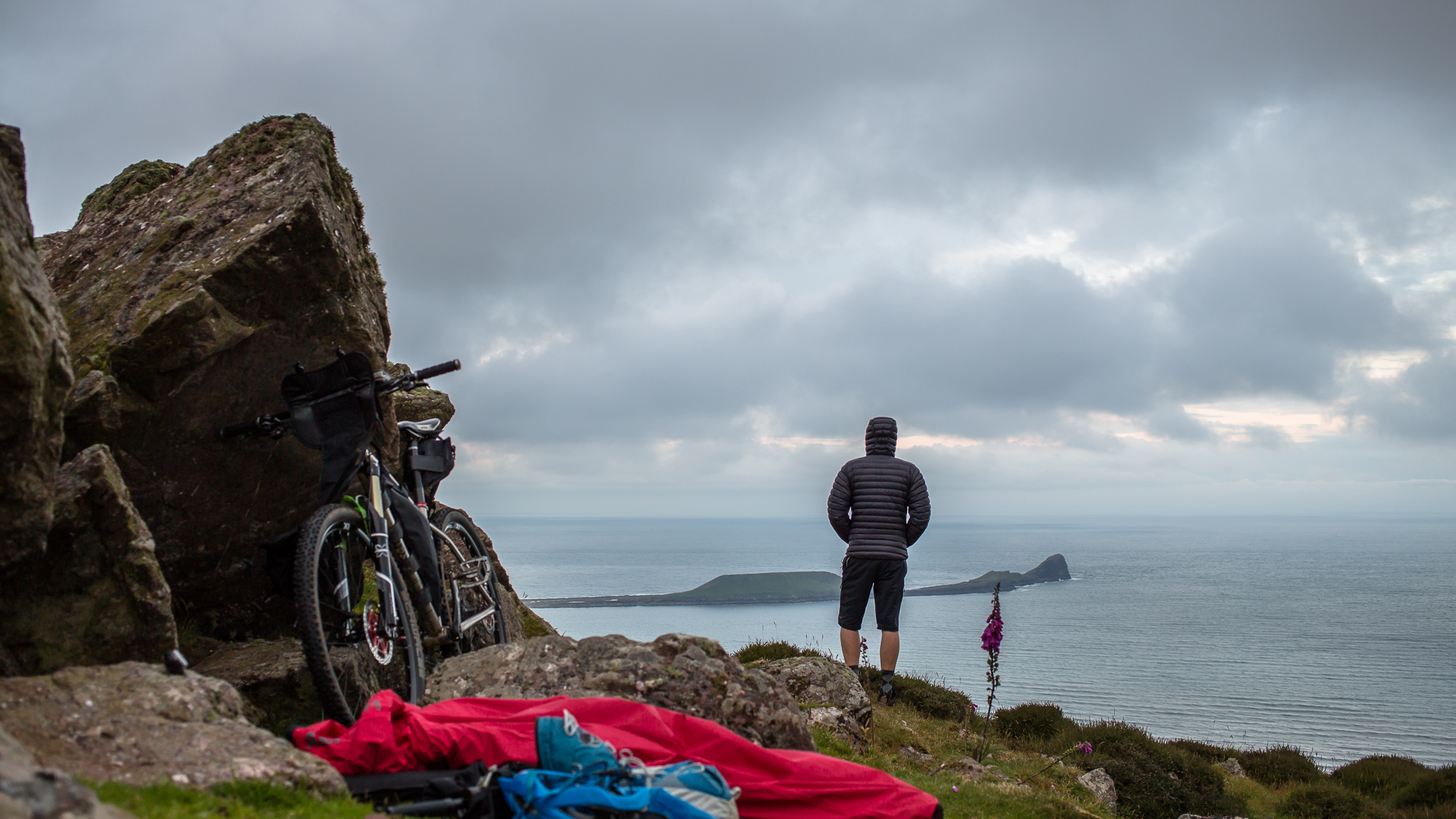 Bikepacking in the Gower.

This trip had been on the cards for quite a while, having ridden with friends on the Gower Peninsula a few times before I was aware of some great riding and more importantly the generous offerings of stunning coastal views. Couple this with the fact that I have wanted to wild camp above Rhossili bay for years it was time for me to plan a route, pack the bike and spend some time exploring this beautiful area. 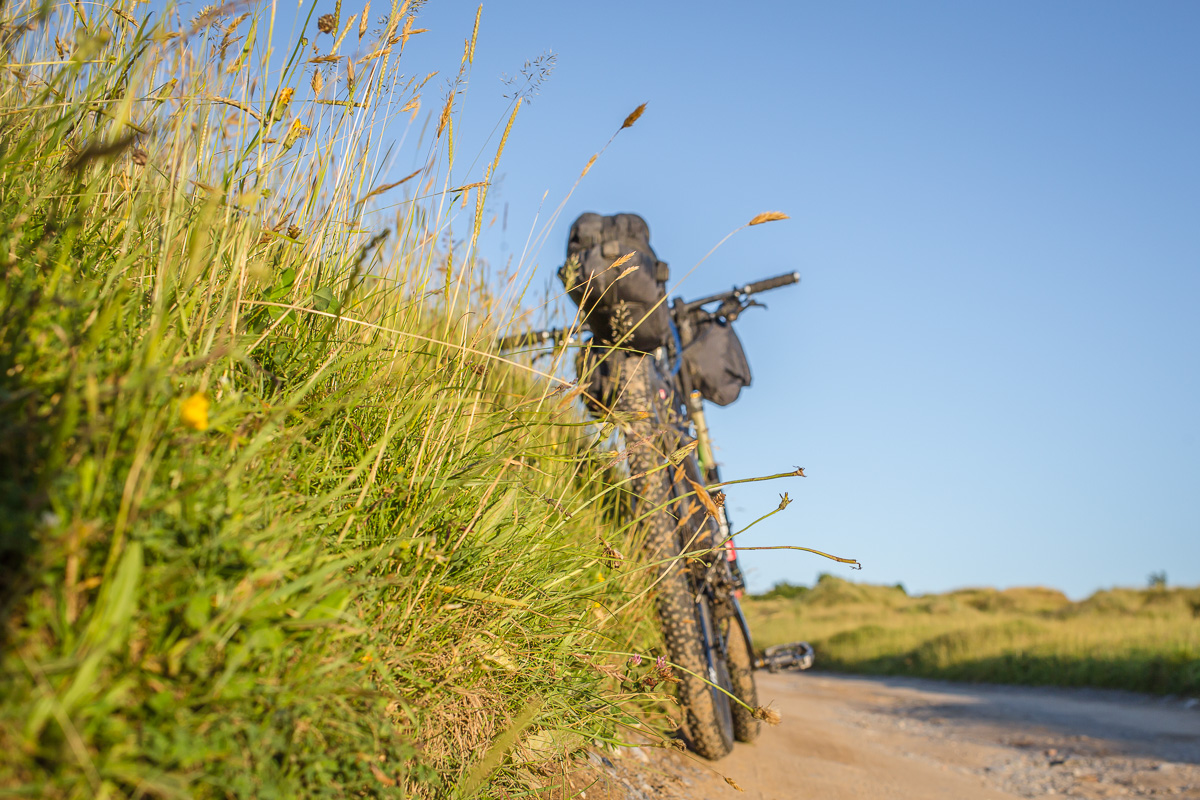 With a rough route planned and my bivi destination pinpointed it was time to jump in the van and head down to Swansea, my aim was to start riding around 6/7pm so that I would hopefully be at Rhossili for sunset. I set off from near Black Pill on the seafront and headed up and over Clyne Common on one of the many bridleways that zigzag over the area. As you climb up and over the Golf Course it opens out to give a great view over Swansea Bay and from there an idea of where your heading. After a gentle meander across the grassy bridleways I popped out on to the road past the Airport and headed South on a mixture of road and bridleways to reach West Cliff near Southgate. 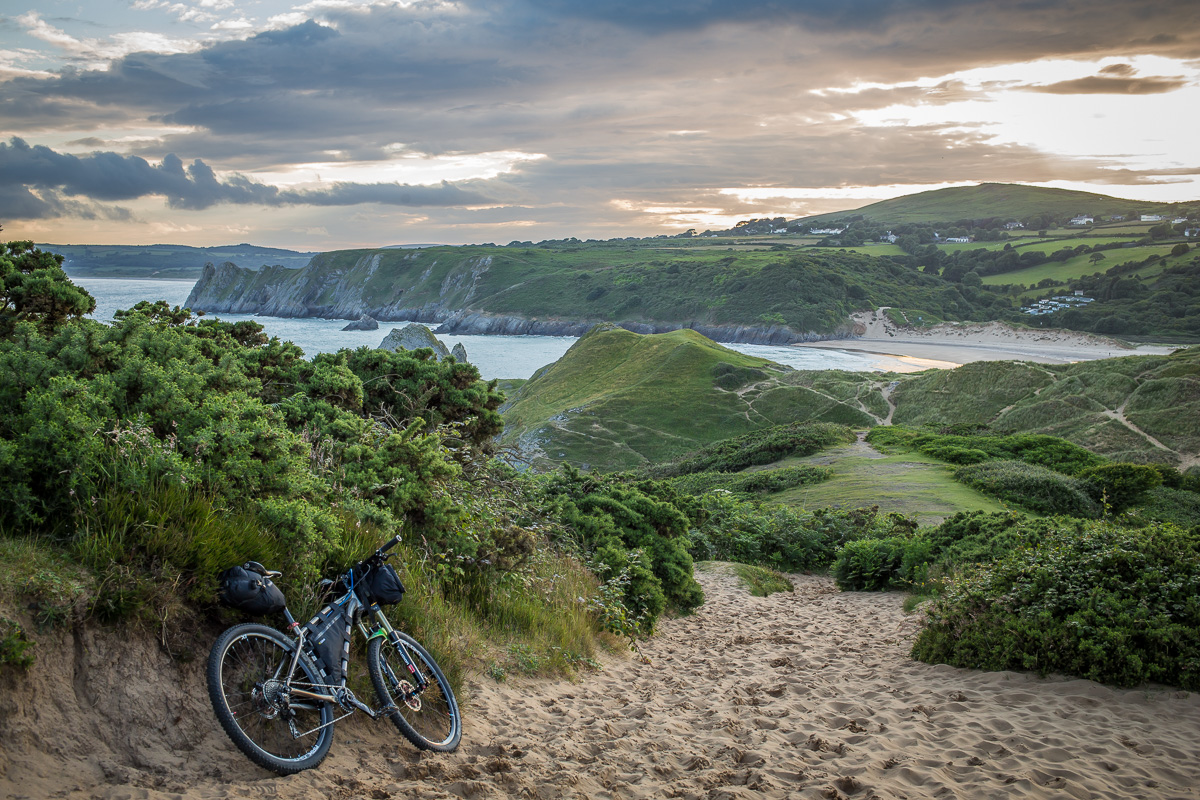 I hadn’t paid enough attention to the map here as the bridleway ends just before the dunes and from there on it was a little bit of  pushing, sketchy sand dune descents and hike a bike until I eventually popped out by the remains of Pennard Castle which overlooks the famous Three Cliffs Bay. 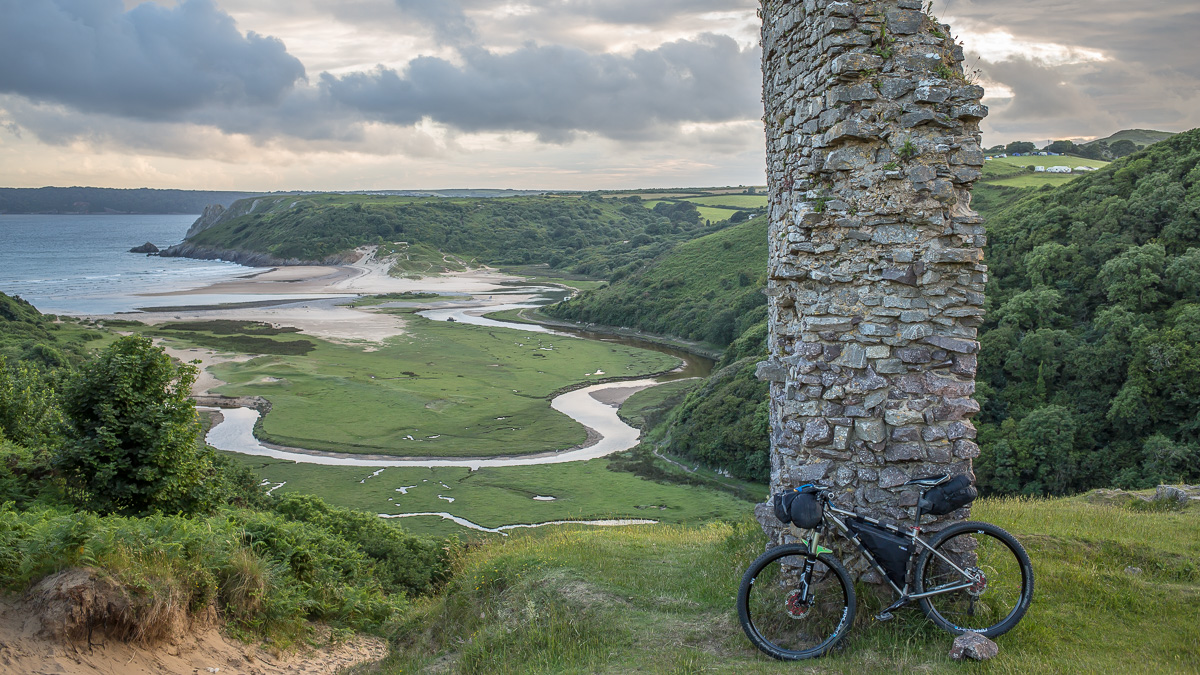 After a little time soaking up the history and breathtaking views I made my way towards Cefn Bryn. With summer now in full flow the towering ferns were causing me some issues whilst trying to climb up to the ridge. Between masking the paths and causing me to hack through as if I was on the set of Jumanji I eventually found my way to the ridge. This is where the views really start to open up and due to my faffing of mass proportions up to this point it was where I was going to witness the evenings breathtaking sunset.

Oh.. what a sunset it was too. I ambled rather slowly across the ridge taking pictures and enjoying the moment as much as possible. As it turned out it was probably the better place to be for this point in time, with the low light bringing the hill top alive. 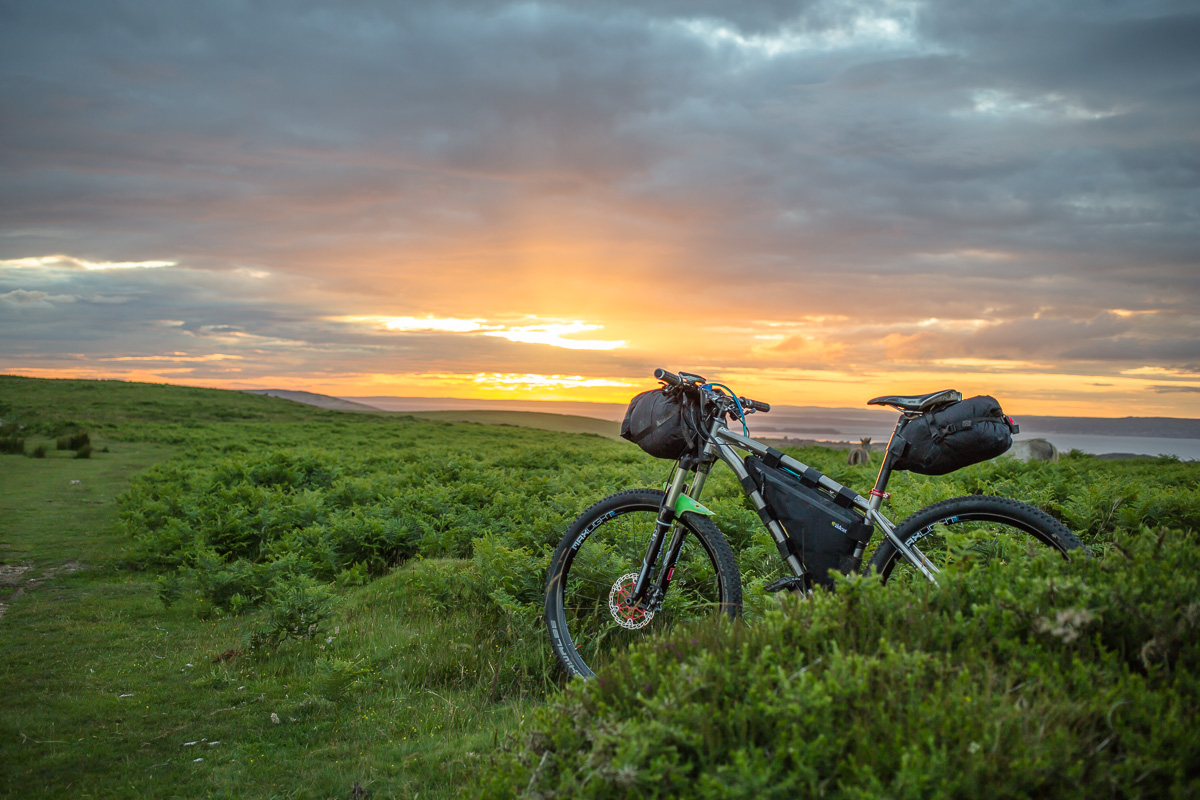 After basking in the last of the days warmth it was time to make my way to Rhossili. I rode on to Llanddewi and jumped on board the Gower Way, which was really a enjoyable ride under the fading light of the day. 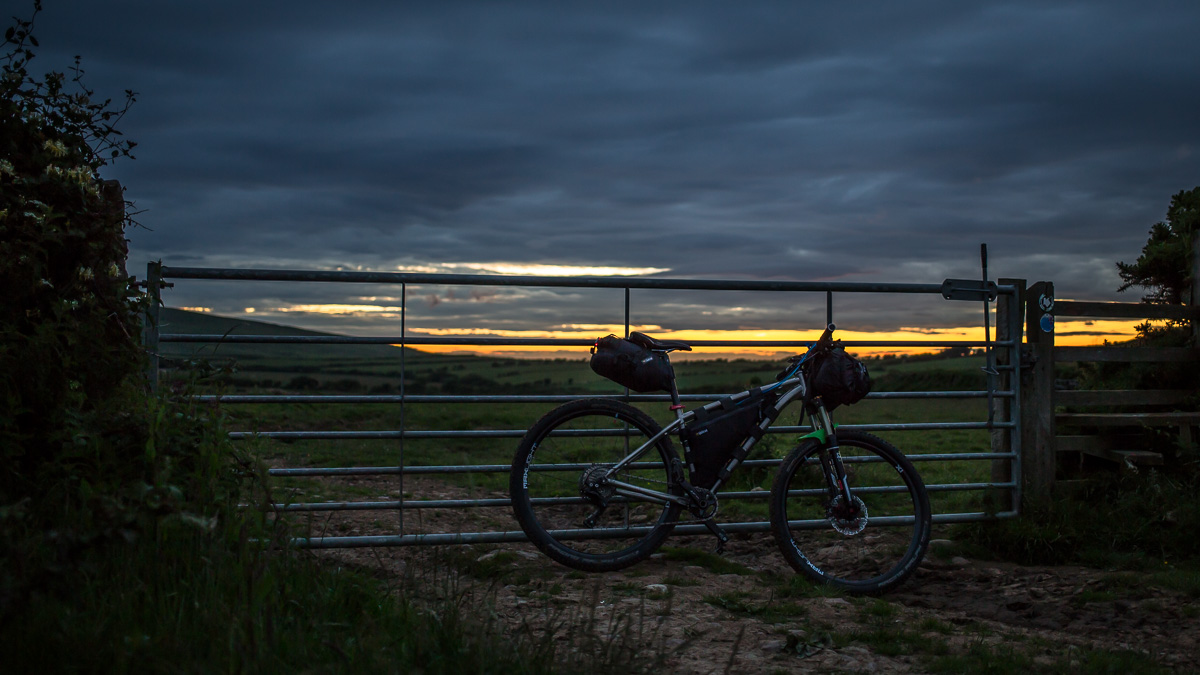 This brought me into Rhossili, by now there was just a small slit of warm light left on the far horizon, with lights helping to guide the way, I headed up my last climb of the day. Once I had summited Rhossili Down I looked for somewhere with a little shelter from the evenings wind but also with a view across the Bay. 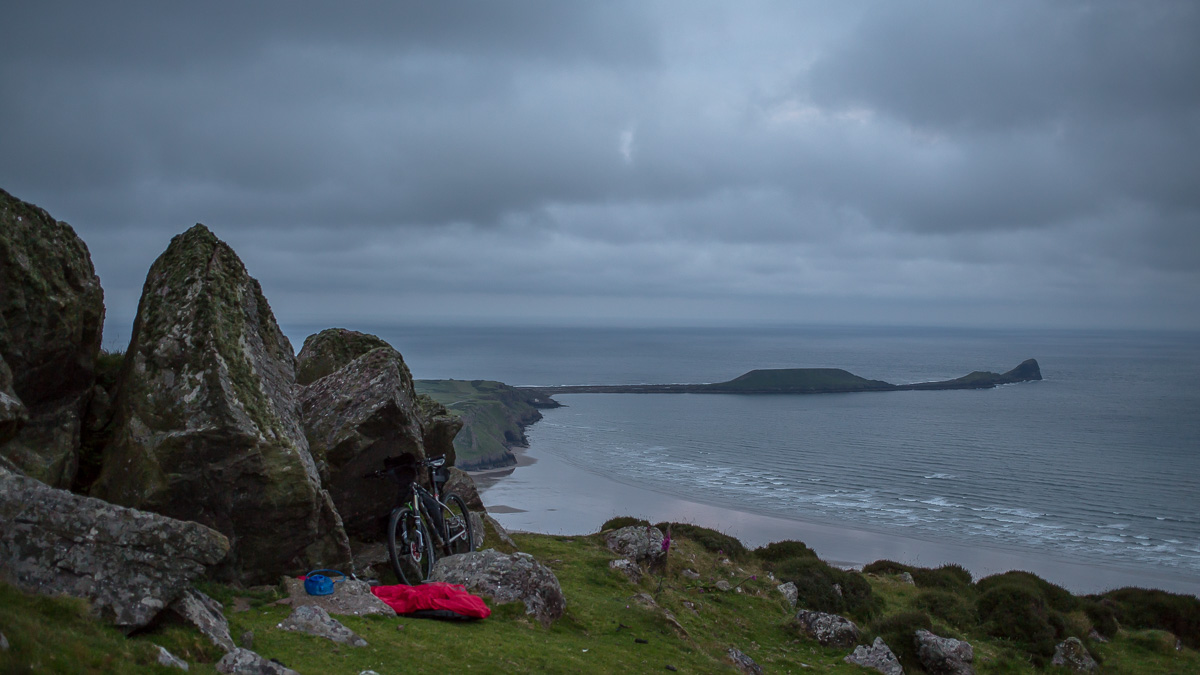 As I brewed up and ate my food I watched the flash lights of fishermen on the Worms Head and a lone trawler heading out for the nights catch. With only the sound of a light wind and the therapeutic noise of waves washing over the shoreline I felt like I had this part of the world to myself. It’s these moments that I live for and one of the main reasons wild camping appeals to me so much. 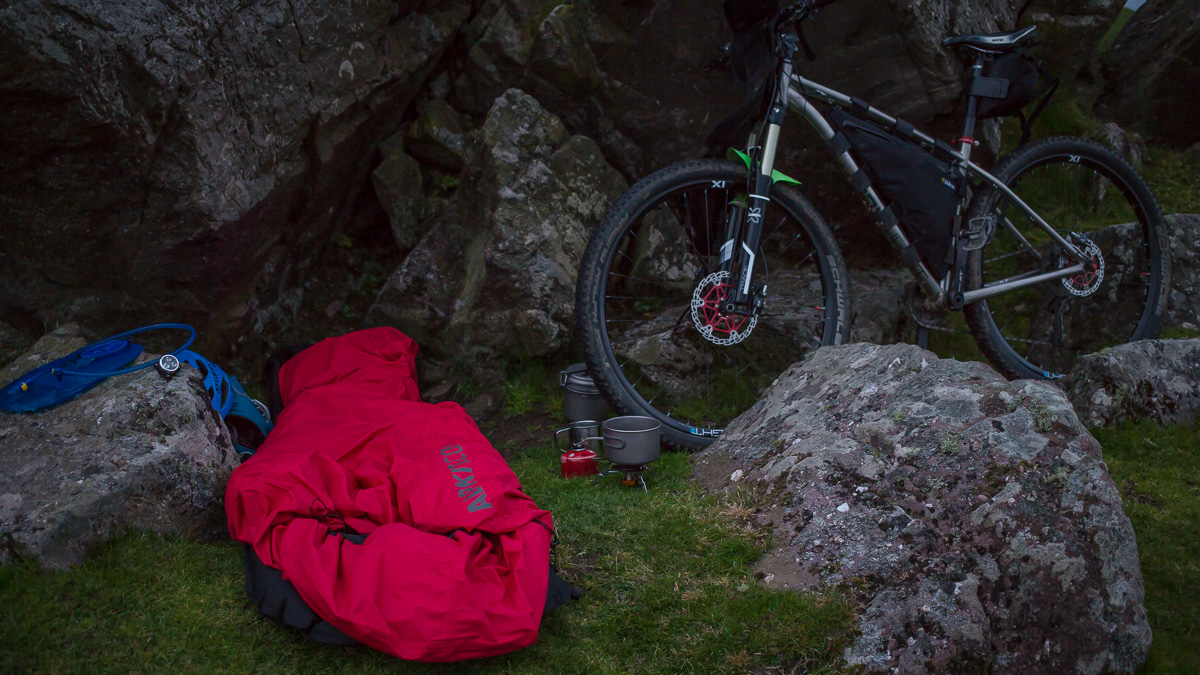 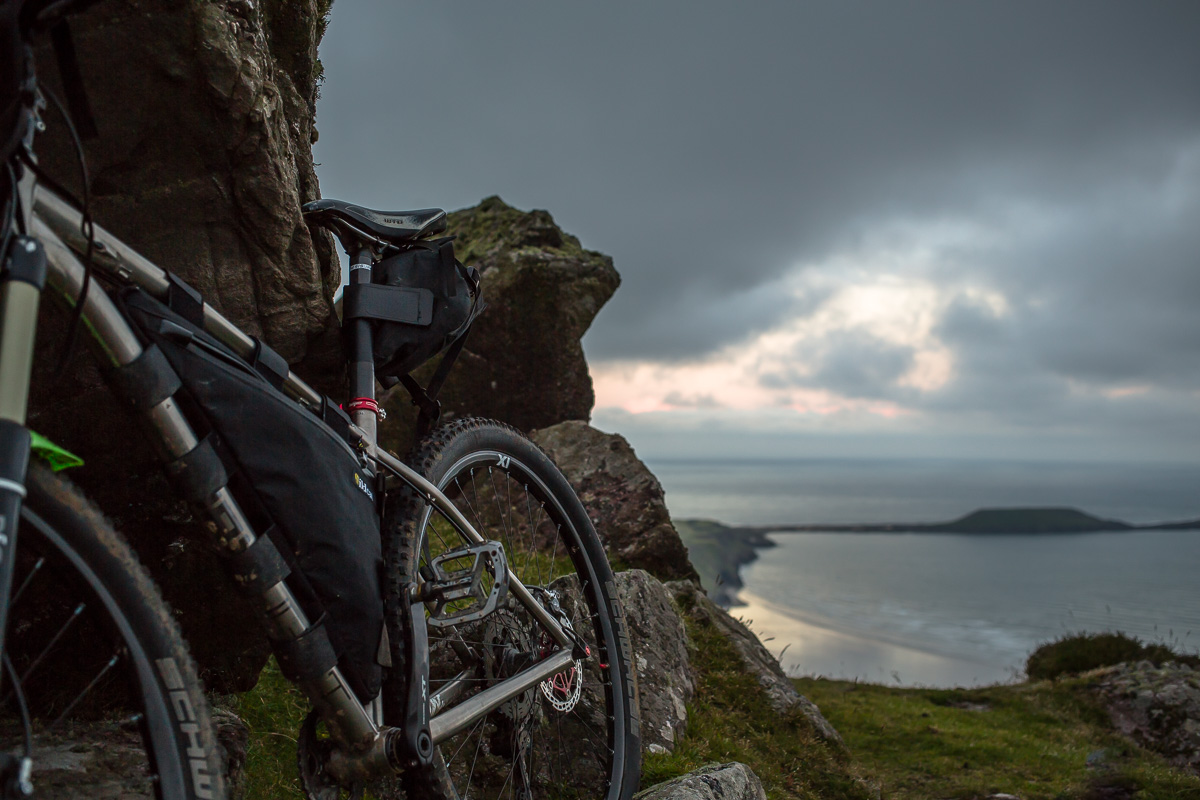 Although I love sleeping in the wild I am a light sleeper which at times is a right pain if theres a lot of wind or in this case a sunrise  not long after 4am. In all honesty this didn’t feel like a real inconvenience as I sat up in my sleeping bag drinking tea watching the trawler make its return journey as the mornings light increased with every minute. I could have sat there for hours but by 05:30 I was packed up and ready to roll. 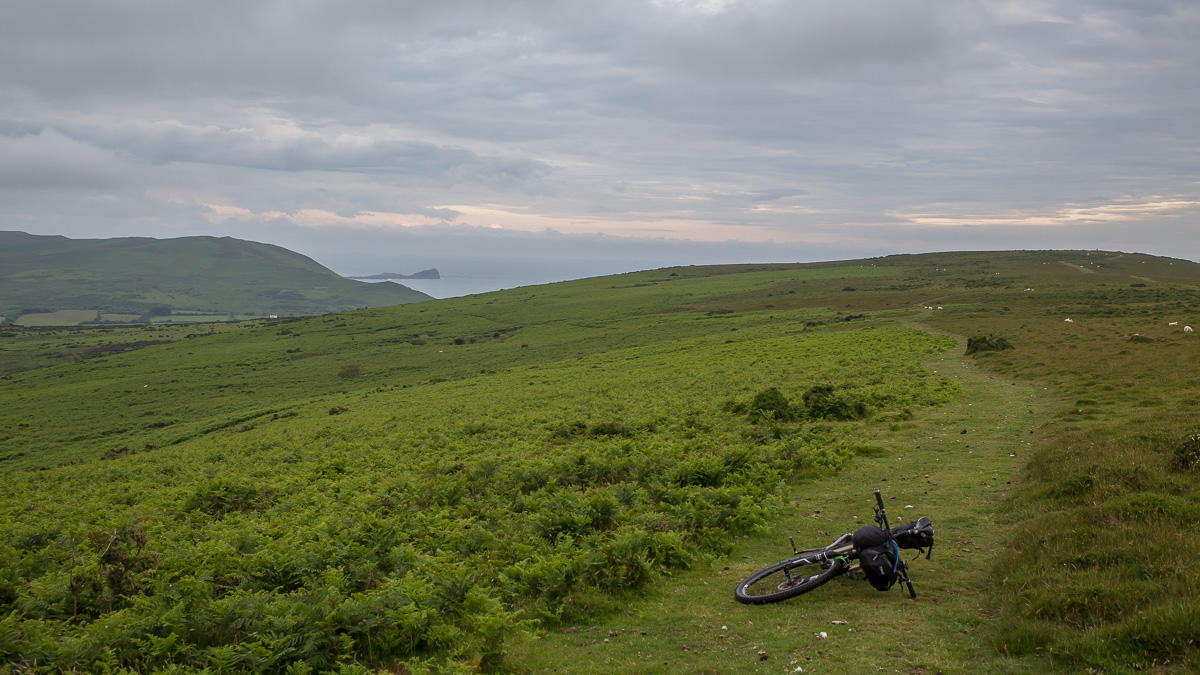 After an awesome decent into Hillend I rode back up to Llangennith and then on up and over Llanmadoc Hill, where I could take one last look back towards Worms Head.

On the other side you are greeted with views across the vast mudflats of Llanrhidian Sands and the Loughor river. From there I used the road to Burry Green where I picked up an ace bridleway that took me up and down various different terrains past ruins and over various streams. 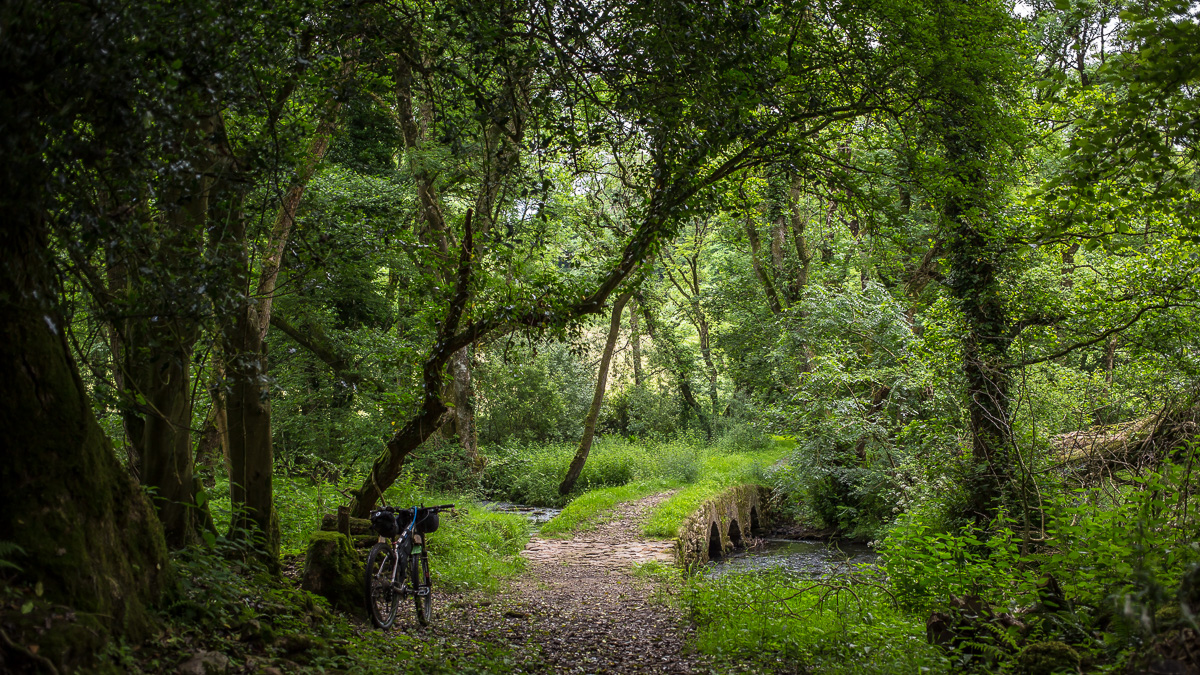 Due to time running out for me, I used some of the many quiet back roads to make a quick return back to Clyne Woods where I finished of my little exploration trip with some great tracks within this wild oasis in the centre of Swansea. Clyne always surprises me as its laced with bridleways and trails throughout its sprawling mass. 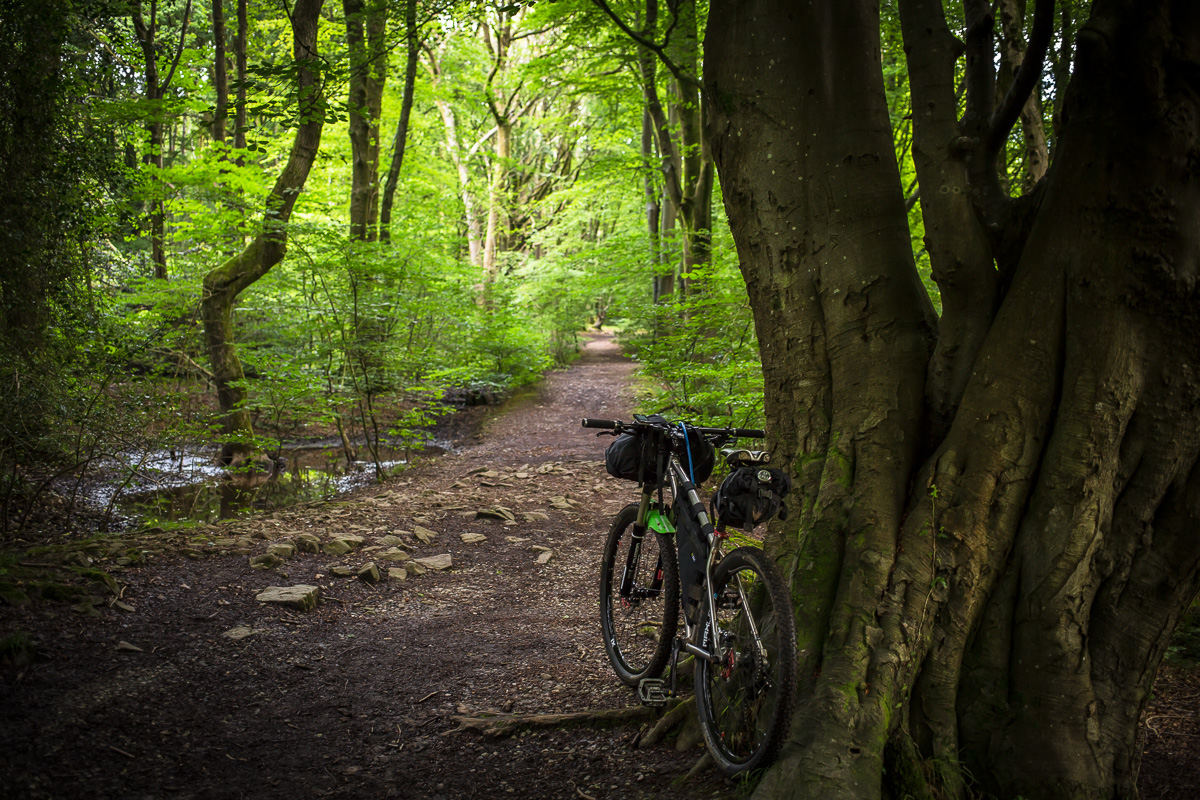 The trip was everything I hoped for and some more. I refreshed my memory on trails I have visited before and found many amazing new ones. Although this came out to be around 70km I think I could easily increase it to a nice 100km loop taking in one of Wales’ most iconic coastlines and peninsular.

As always thanks to the following for helping make my adventures that little bit better.

Below is my route on Viewranger. Please bare in mind this is my first bike packing trip here and there are many more amazing trails to be found and linked in. This will help give a great base for a mini adventure. 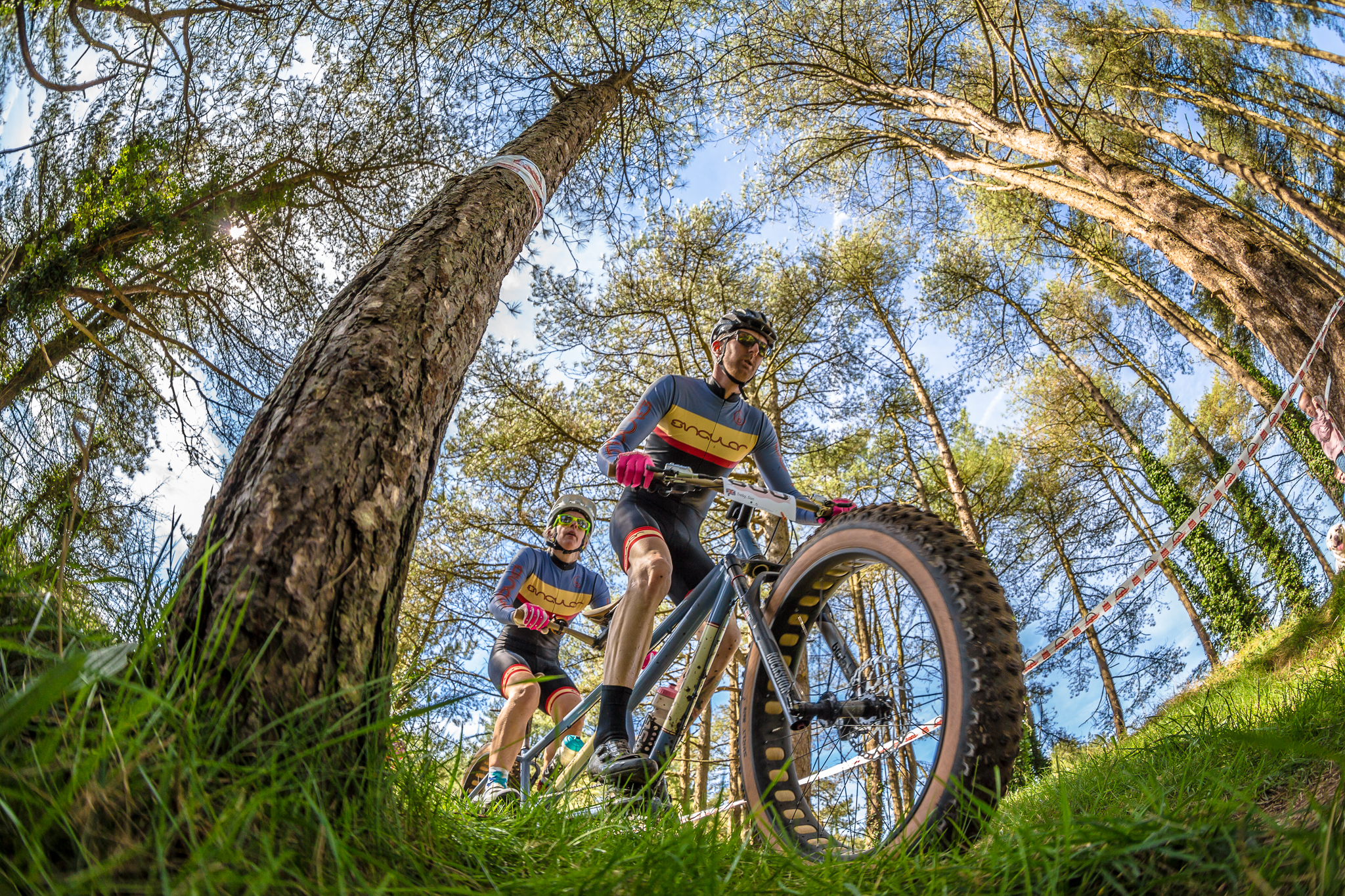